Totally agree. That's one of the best WRX shapes ever just made even better.

It looked like a girl when Cameron drove it

spite wrote:It looked like a girl when Cameron drove it

At least it ran when I owned it...

don't be a hater

The last lap of the day, on slicks in the wet

Well because there is nothing else to do on a Sunday arvo while watching the V8's I thought that I might post a little update.

As most of you know the car was being built for World Time Attach Challenge this year at Sydney Motorsport Park (Eastern Creek).

Like most things in life, not everything went to plan with the build. There was actually a lot of different issues which did impact preparation and ultimately slowed me at the event.

Long story short, there were issues with the Motec, the alternator, fuel pumps, sensors, fuel, fuel and then fuel.

Finally, two weeks before WTAC I managed to get in 16 laps at Lakeside and the engine was finally strong. The down side was there was just no time for testing the actual setup of the car even though we were running a much stiffer car with much wider rubber. Either way the car was loaded into the trailer and and we made the journey south to Sydney.

I spent Wednesday and Thursday at a private testing event, but with limited spares and time both days were really spent learning the track.

Last year the winning time for Club Sprint was 1:42.4 and Nev did a 1:44.9. I had set myself the target to try to match Nev's time from last year, as his car in last year spec was very similar to mine - similar power, similar aero but I was about 150kg heavier but had the wider Tyres.

My first session ever at SMP was Wednesday morning and I managed a very steady 1:52. First impressions of the track were WOW. There are so many different corners. Turn 1 is a high speed aero corner, turn 2 is a 60kmph 190 degree turn and the remainder of the track is ridiculously technical - like nothing else I have ever driven.

Session two saw my times plummet to a 1:46 and the car was doing high 1:45's by the end of the day. The take home from the day was that I was way under aero-ed compared to the rest of the cars, and my shocks were simply not up to the task - The car has just evolved to something more than street shocks can handle. It was very disappointing to only find this out when it was essentially to late but it was the package that we had so it was a matter of fighting the car for the remainder of the week - not really something you want to be doing at 176kmph though turn 1

Thursday and Friday saw my lap time consistently fall lower and lower. By Thursday arvo I had already better my original goal. I was running a mid 1:44. So my new goal was to get into low 1:43's.

Things were going to plan on friday to see a 1:43 in the last session but things were not to be. I left pit late ready top have a red hot go at the time and arrived at turn 2 with no steering. Luckily it was the out lap and I was only traveling at a reasonable pace. I managed to limp the car back to pit lane but it was evident that the session and the day was over.

Luckily for me I had the support of Fulcrum and NA Autosport mechanics and we managed to fix it that night and it was ready for Saturday.

Saturday went really well and I managed to fight the less then perfect package down to a 1:42.2. I was absolutely stoked with the end result. Even though the rest of the field had well and truly lifted the bar over last year it was my first drive at SMP and I was extremely happy with the time and 7th in class.

After the fall out from this years event, I think that next years rules will be a lot different so I think that there will need to be some changed made over the next year.

The current plan is to get the centre diff sorted so it does not bag up the rears. Upgrade the suspension to either the top line Tiens or a set of MCA's and then weight. Fiberglass everything is the plan. Not to mention the ability to run on an R Spec tyre. This alone we are putting at least 4 possibly 5 seconds improvements.

All in all I am happy, but there is a lot of work to do to get it back to an enjoyable car to drive rather then a beast to wrestle.

A couple of images of the car from the event

Great write up mate, sounds like you now know which direction you need to go for results you want! Good Luck!
Todd
Top 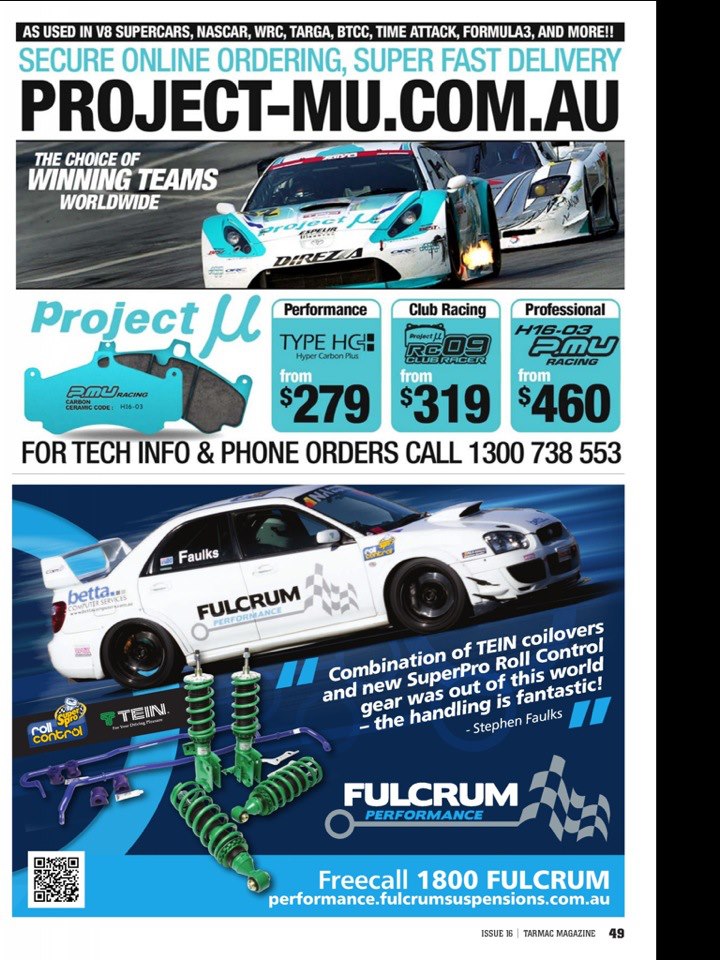 BUT ... its a very messy lap, as i turn in too early on close to every corner - but you have to love toasting two cars at once

And, looks like we will be back in Sydney again this year

Congrats on the recent win Steve.. Glad to see the package is coming together for you and getting results.

AWD Performance Class winning lap, even with slowing down the straight to let the outright winner complete his hot lap.